Not Your Mom’s Genes: Mitochondrial DNA Can Come from Dad

>4 DugsBooks: Doesn't that throw any conclusions about Mitochondrial Eve into doubt?

>5 jjwilson61: Yeah, just what I was thinking but I don't know enough about the specifics to puzzle it out.

I was also rather surprised, as were many others evidently, to read the following headline:

I read several articles on the topic one of which said a USA scientist from California is in the hot seat also as he was there in China when the work was done - using some of his expertise.

>4 DugsBooks: >5 jjwilson61: Wow, this is big. I’m sure the implications for genetics will be greater than for evolutionary biology, in which mitochondrial DNA is a tool rather than the topic of study in itself. Nonetheless, yeah, this is going to throw a lot into question. I suspect it won’t undermine the field now nearly as much as it might have a decade and a half ago, given the advent of whole genome sequencing which has rendered mitochondrial DNA analysis less central.

I think it should be added that the whole “Mitochondrial Eve” phrase is fraught, with its religious overtones and inappropriate suggestion of an original “first women”, etc. Within a short time, the field was trying to walk back the misconceptions the term was promulgating...

>6 DugsBooks: And that Crispr news is stunning and scary. Not surprising, as everyone has known this was coming. It’s nice to see strong reaction from the Chinese scientific community, but I don’t find that reassuring. I suspect that there are forces within the country that are not impressed with the ethical issues and will happily coopt the science and scientists to achieve desired ends.

>6 DugsBooks: >8 stellarexplorer: What no one seems to be talking about in the Crispr story, is what happens when you inactivate the HIV receptor, CCR5. Normally that receptor has an important function in the body that has nothing to do with HIV. I forget what it is and haven't looked it up, but I wonder if anyone considered that.

From what I've read, it seems like they just fixed a mutated gene that made it more likely that someone would contract HIV. Did they really inactivate a functional gene?

>10 jjwilson61: Yes, I am pretty sure they altered a functional gene. Maybe they didn't inactivate it. Maybe they just made it less likely to bind HIV without affecting its natural function. I don't know, but I am skeptical that they took the time and effort to do that. The question is whether they know. Normally if you were going to do Crispr, you would try it on an abnormal gene and make it functional. Then at least the positive effect has a chance to balance the risks. Nothing in any of the articles I have read says whether CCR5 still works the way it is supposed to. That is a really, really important question!

“Apart from raising ethical concerns, scientists said the gene He "edited-out," called CCR5, is crucial to the human immune system, and removing it increases the risk of susceptibility to other diseases such as the West Nile virus and influenza.”

>13 krazy4katz: That fact deserves to be publicized more.

>13 krazy4katz: Thanks for pointing that out, since then I have seen other articles mentioning that.

>5 jjwilson61: I thought of mosaic genetics when I first heard of the mitochondrial discovery also, wondering if that was similar. Below is a photo of an obviously demon/mosaic cat {this one for you krazy4katz ! }

Thank you, >15 DugsBooks:! I just love, love that cat!! I don't think this type of mosaicism has anything to do with mitochondrial DNA. It is probably nuclear. However it makes one wonder why none of us is like that… Maybe some people have different colored eyes? That is all I can think of.

Yep. Some people do. I know of someone who has different colored eyes (blue and green, and his nephew has the same thing). 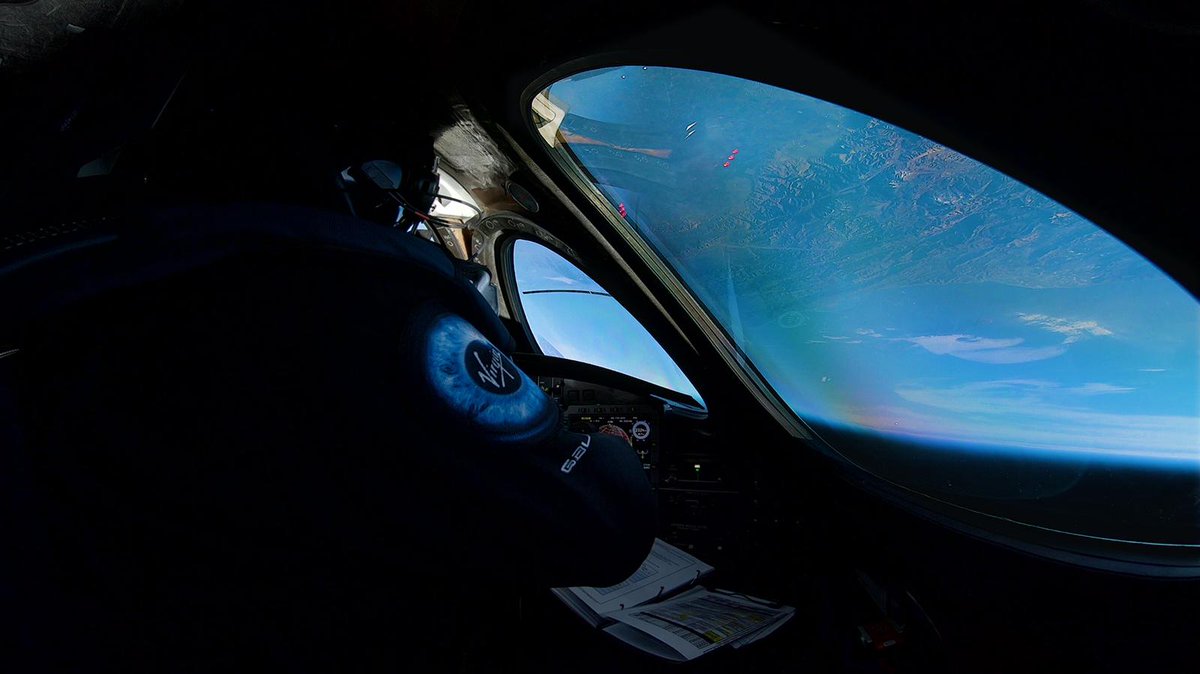 Branson's Virgin Galactic had a trial flight today and:

At the Twitter site link you can see the real time evolution of the flight. https://twitter.com/virgingalactic

Underground Ecosystem More Diverse Than Life on The Surface

This is one of several articles available explaining new data that shows "The subteranem biosphere reportedly contains between 15bn and 23bn tonnes of microorganisms, hundreds of times the combined weight of every human on the planet. " I guess this lends weight to the theory that a lack of life on a planet is the exception rather than the rule. Maybe it would also lessen worries about "Earth organisms " affecting Mars possible biome.

“I guess this lends weight to the theory that a lack of life on a planet is the exception rather than the rule.”
Yep, it’s one more example of the ubiquity of life, the range of niches on Earth, etc.

“Maybe it would also lessen worries about "Earth organisms " affecting Mars possible biome.”
Can you spell out how this finding might lessen this concern?

>21 stellarexplorer: My first notion was that Mars may have “submartian” - under the soil/rock life but any organisms brought from Earth would have a difficult time out competing the native species since they, for the most part I assume, derive from an above ground environment on Earth.

So other than the hassle of earth bugs getting in the way when we are trying to find Mars bugs I see no reason to fall into some Kim S. Robinson Mars books inspired rage over the issue.

>22 DugsBooks: interesting. That last is why we might as well conduct a thorough search for Mars life first. I’m certainly in the “ubiquity of life” camp, and I’d be surprised if there’s life remaining. I’d rather be surprised early than late. My concern would be less for the little Martian microbes than for missing a chance to identify and learn from our first contact with non-Earth-derived life.

As far as subsurface Martian life limiting the proliferation of what we bring, you may be right, but I’d rather not leave it to logic. Not that I’m particularly concerned. I don’t see Mars as the best candidate in the solar system for life. But I wouldn’t want to be reckless about it.....

As the owner of 19 Kim Stanley Robinson books, was that anti-KSR sentiment I detected ? ;-)

Just watched the NASA New Horizions space craft team make contact with the satellite after the fly by with asteroid Ultima Thule on New Year’s Eve. These are the same folks who got all the info on Pluto .

Space.com has several articles with links and I use an app “Pluto Safari” which makes the research results accessible. Bad news is the asteroid is so far away it will take over a year to download all the photos etc.

I happen to be currently reading KSR’s 2140 - a tribute to the fate the global warming non believers will leave us with. So far pretty good, I like most of the info dumps on science. When he jaunts on to dozens of pages of political rants I use my best skim techniques however.

>24 DugsBooks: Last night’s NOVA focused on the New Horizons mission. I highly recommend it. So cool! And to think we are now exploring these objects that seem to be the remains of the materials that went into the original accretion of matter into our solar system’s planets....I’m in awe of this, imagining all these Kuiper Belt-like Objects sharing orbital space with the growing early planets 4 and a half billion years ago, being sucking into their gravity wells and adding up over time to massive planets...

>25 DugsBooks: Here’s my review of his current book, Red Moon, which I cite because it’s more about KSR than the book:

“More often than not a Kim Stanley Robinson book is on my list of yearly favorites. This is both a tribute to his productivity as a writer, and to his poetic and thoughtful style. I’ve been hooked ever since his acclaimed Mars Trilogy from the early 1990s beginning with Red Mars, the long tale of the terraforming of that planet.

But Robinson has written many other worthy and delightful books, all with fidelity to the science, linguistic experimentalism, and an introspective narrative voice, distinct and unmistakable.

In Red Moon, he turns his attention to the near-future politics of lunar life, China having gained ascendancy there. It is no surprise that his vision of the human experience on the moon is convincing and informed, from the challenges of locomotion to the perception of Sun and Earth from the lunar surface. As with many of Robinson’s novels, his utopian aspirations and concerns for the future of humanity rest close at hand. This inspires some and tires others. I’m in the former camp. This book also feels like the author’s attempt to grapple with the rise of the world’s future hegemon. Chinese society thirty years hence is energetic and vibrant, riven and restrictive. I found the grand stew that is Red Moon quintessential Robinson.”

His books are not for everyone, but I like them a lot. My favorites, I think, are the three Science in the Capital books starting with Forty Signs of Rain. I liked Shaman a lot, and 2312 Quote from link below: "The new images — taken from as close as 17,000 miles (27,000 kilometers) on approach — revealed Ultima Thule as a "contact binary," consisting of two connected spheres. End to end, the world measures 19 miles (31 kilometers) in length. The team has dubbed the larger sphere "Ultima" (12 miles/19 kilometers across) and the smaller sphere "Thule" (9 miles/14 kilometers across)."

>28 DugsBooks: There's a stereoscopic image out there of this image done by Brian May of Queen and astrophysics fame.

>29 justifiedsinner: I found the image on the Pluto Safari app. I did not notice any accreditation for the image- have no stereo glasses however!

I have been waiting for Brian May to pop up in the news ever since I read of him going back and finishing his thesis on space dust distribution or whatever.

Chasing New Horizons: Inside the Epic First Mission to Pluto is a new book out on the NASA satellite that heard about on Science Friday - have not read it yet.

As long as we’re on the topic, I made a video on New Horizons/Ultima Thule, which can be found here:
https://youtu.be/Vw6umbhqsCg

This mission was astonishing: after 4.6 billion years we look upon the preserved building blocks of our planet....pretty incredible!

Is there a follow up video of your feelings, after you got older, when you found out you have to pay taxes while staying on planet earth and wondered if the other parts of the solar system are the same way? ;-)

>34 DugsBooks: Ha, there should be. No, the next vid is a follow up in which I marvel that for the first time ever we can now make theoretical models of the formation of our own solar system and then use actual images of other newly forming solar systems as evidence.

Aside: One of the great things about making astronomy videos is access to incredible images that are in the public domain! 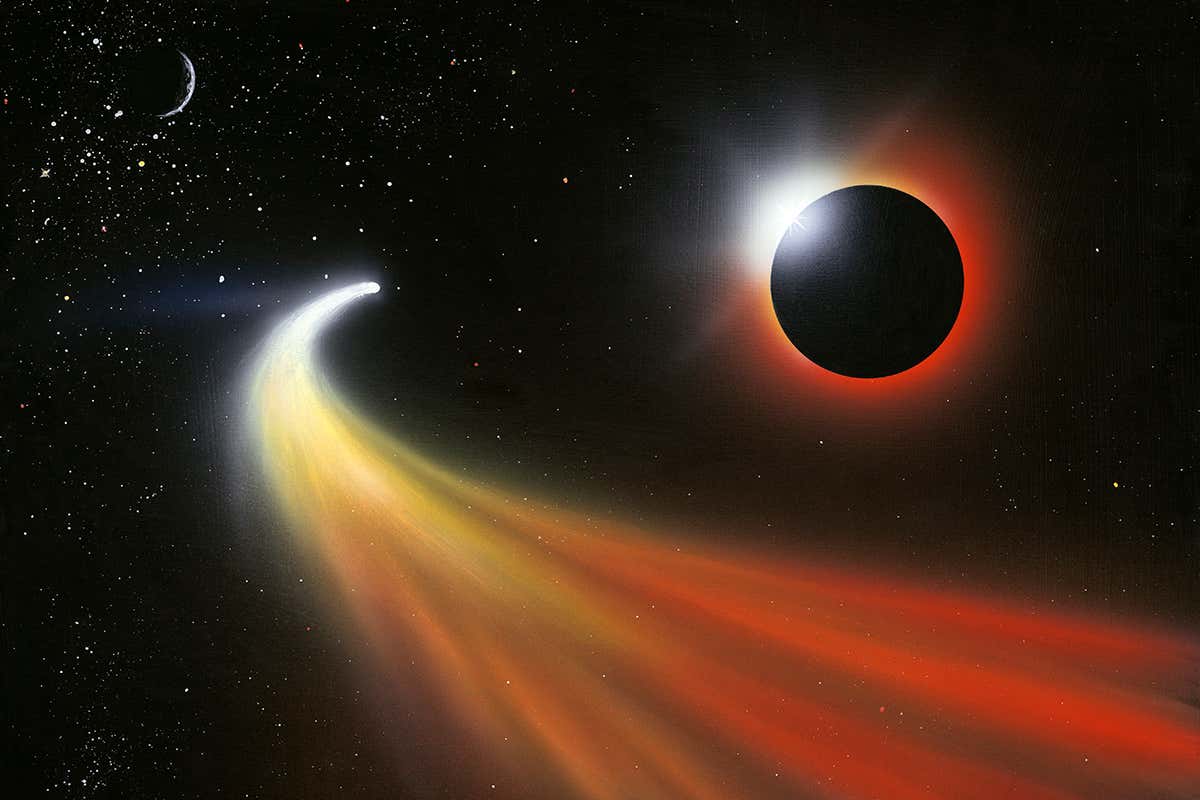 
I read this article In Extreme Tech that describes how a binary star {or any other probably} can divert the orbit of planets and a recently discovered example of this. In the course of the article it mentions Scholz’s Star that passed through the Sun's ort cloud 70,000 years ago. Wiki mentions that "Comets perturbed from the Oort cloud would require roughly 2 million years to get to the inner Solar System" when describing the fly by of the Scholz's system. So I guess we have some possible fireworks in our future and how soon dependent on how the billiard balls bounce.