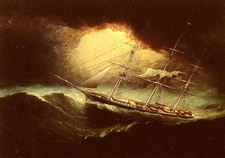 The sheets were frozen hard, and they cut the naked hand;
The decks were like a slide, where a seaman scarce could stand;
The wind was a nor'-wester, blowing squally off the sea;
And cliffs and spouting breakers were the only things a-lee.

They heard the suff a-roaring before the break of day;
But 'twas only with the peep of light we saw how ill we lay.
We tumbled every hand on deck instanter, with a shout,
And we gave her the maintops'l, and stood by to go about.

All day we tacked and tacked between the South Head and the North;
All day we hauled the frozen sheets, and got no further forth;
All day as cold as charity, in bitter pain and dread,
For very life and nature we tacked from head to head.

We gave the South a wider berth, for there the tide-race roared;
But every tack we made we brought the North Head close aboard.
So's we saw the cliff and houses and the breakers running high,
And the coastguard in his garden, with his glass against his eye.

The frost was on the village roofs as white as ocean foam;
The good red fires were burning bright in every longshore home;
The windows sparkled clear, and the chimneys volleyed out;
And I vow we sniffed the victuals as the vessel went about.

The bells upon the church were rung with a mighty jovial cheer;
For it's just that I should tell you how (of all days in the year)
This day of our adversity was blessèd Christmas morn,
And the house above the coastguard's was the house where I was born.

And well I knew the talk they had, the talk that was of me,
Of the shadow on the household and the son that went to sea;
And O the wicked fool I seemed, in every kind of way,
To be here and hauling frozen ropes on blessèd Christmas Day.

They lit the high sea-light, and the dark began to fall.
“All hands to loose topgallant sails,” I heard the captain call.
“By the Lord, she'll never stand it,” our first mate, Jackson, cried.
…“It's the one way or the other, Mr. Jackson,” he replied.

She staggered to her bearings, but the sails were new and good,
And the ship smelt up to windward just as though she understood;
As the winter's day was ending, in the entry of the night,
We cleared the weary headland, and passed below the light.

And they heaved a mighty breath, every soul on board but me,
As they saw her nose again pointing handsome out to sea;
But all that I could think of, in the darkness and the cold,
Was just that I was leaving home and my folks were growing old. 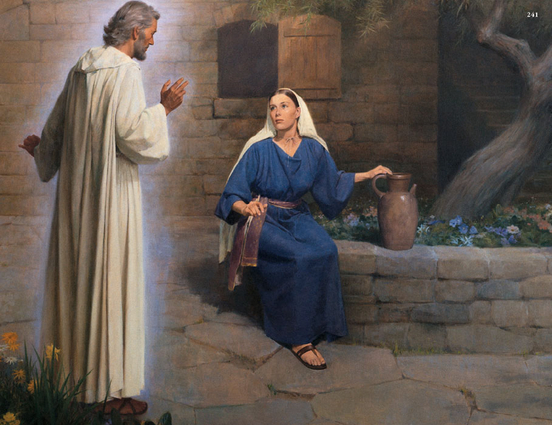 The angel Gabriel from heaven came,
With wings as drifted snow, with eyes as flame.
“All hail to thee, O lowly maiden Mary,
Most highly favored lady.” Gloria!

“For know a blessed mother thou shalt be,
All generations laud and honor thee;
Thy son shall be Emmanuel, by seers foretold,
Most highly favored lady.” Gloria!

Then gentle Mary meekly bowed her head;
“To me be as it pleaseth God,” she said.
“My soul shall laud and magnify God’s holy name.”
Most highly favored lady.” Gloria!

Of her, Emmanuel, the Christ, was born
In Bethlehem all on a Christmas morn,
And everyone throughtout the world will ever say,
“Most highly favored lady.” Gloria!

Our God, Heaven cannot hold Him, nor earth sustain;
Heaven and earth shall flee away when He comes to reign.
In the bleak midwinter a stable place sufficed
The Lord God Almighty, Jesus Christ.

Angels and archangels may have gathered there,
Cherubim and seraphim thronged the air;
But His mother only, in her maiden bliss,
Worshipped the beloved with a kiss.

Ring out the grief that saps the mind,
For those that here we see no more,
Ring out the feud of rich and poor,
Ring in redress to all mankind.

Ring out a slowly dying cause,
And ancient forms of party strife;
Ring in the nobler modes of life,
With sweeter manners, purer laws.

Ring out the want, the care the sin,
The faithless coldness of the times;
Ring out, ring out my mournful rhymes,
But ring the fuller minstrel in.

Ring out false pride in place and blood,
The civic slander and the spite;
Ring in the love of truth and right,
Ring in the common love of good.

Ring in the valiant man and free,
The larger heart, the kindlier hand;
Ring out the darkness of the land,
Ring in the Christ that is to be.

Their time past, pulled down
cracked and flung to the fire
—go up in a roar

All recognition lost, burnt clean
clean in the flame, the green
dispersed, a living red,
flame red, red as blood wakes
on the ash—

At the winter’s midnight
we went to the trees, the coarse
holly, the balsam and
the hemlock for their green

to fill our need, and over
doorways, about paper Christmas
bells covered with tinfoil
and fastened by red ribbons

we stuck the green prongs
in the windows hung
woven wreaths and above pictures
the living green. On the

were walking there. All this!
and it seemed gentle and good
to us. Their time past,
relief! The room bare. We

stuffed the dead grate
with them upon the half burnt out
log's smouldering eye, opening
red and closing under them

and we stood there looking down.
Green is a solace
a promise of peace, a fort
against the cold (though we

did not say so) a challenge
above the snow's
hard shell. Green (we might
have said) that, where

small birds hide and dodge
and lift their plaintive
rallying cries, blocks for them
and knocks down

the unseeing bullets of
the storm. Green spruce boughs
pulled down by a weight of
snow—Transformed!

Violence leaped and appeared.
Recreant! roared to life
as the flame rose through and
our eyes recoiled from it.

In the jagged flames green
to red, instant and alive. Green!
those sure abutments . . . Gone!
lost to mind

and quick in the contracting
tunnel of the grate
appeared a world! Black
mountains, black and red—as

yet uncolored—and ash white,
an infant landscape of shimmering
ash and flame and we, in
that instant, lost,

breathless to be witnesses,
as if we stood
ourselves refreshed among
the shining fauna of that fire.