Just came back from the library with 'THE LAST LOST WORLD' (2012) about how the various hominids survived the last Ice Age in the northern hemisphere. It was the period when Homo Sapiens Sapiens became to only species of human on the planet. It illustrates the Imperative "Evolve or Die." I'll get back to you later with a review.

In Pro or Con topic section there is a discussion titled "Should we clone extinct humans?". It stems from a book A Bone Here, a Bead There: On the Trail of Human Origins {link to NYT article about the book, no one fixed the touchstone for it yet}. It covers Neanderthals and Denisovans and human mixes.

>2 DugsBooks: The book is called Lone Survivors: How We Came to Be the Only Humans on Earth. Maybe it has a different name published outside the US?

Actually, I see the alternative title (UK) is The Origin of Our Species

"A Bone Here, a Bead There: On the Trail of Human Origins" is the title of the NYT article, not the book.

Thanks for the correction Stellar - duh on my part, too much of a hurry I guess.

I just finished reading Lone Survivors: How We Came to Be the Only Humans on Earth and found it very interesting. Dang have there been a lot of new fossil dating techniques developed since I was in school. I am thinking of finding a used text book that has some extensive explanations of these techniques. Trying to keep my half education relevant ;-)

Let us know what you think of The Last Lost World I might give it a read down the road.

I'm going to look for a copy of Lone Surivors. It's an area that has generated a lot more interest over the last decade than previously.

#1 Talking about "survived the last Ice Age" how about this article that came out today!

I wonder if these statues are life size? 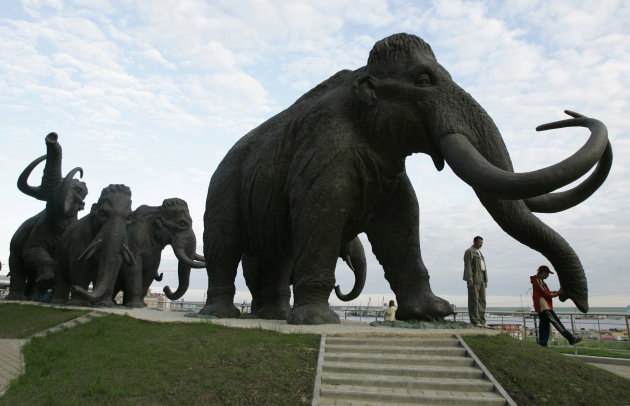 One of my favorite recent books (recently read, anyway) is Children of the Ice Age, about how Man evolved because of it.

I thought I would post this link to an article that people who are interested in this topic might find interesting. Looking 32,000 Years into the Past: Q&A With Author Kim Stanley Robinson which mentions KSR's new book coming out "Shaman," which is to be released on Sept. 3, 2013 according to the article.

Just got the notice that my preorder has shipped.

Likely, I'll enjoy it. He's one of the few authors whose new work I buy sight unseen. But I'll report back.

My local library got a copy of Shaman in and I read it over the weekend. Here is a crosspost from the SF section of LT with my "review".

"Well I finished Shaman by KSR. Kind of neat "Clan of the Cave Bear" tale inspired by some recent discoveries in archaeology - new-found cave paintings which were done in a manner that made them seem to move & possibly the first movie. KSR's description of the environment is very convincing - I bet he has hiked some glaciers.

Aha!! I see this momentous discovery has inspired other writers of note, see post 166 at the link for an article about the cave drawings. ;-)

Here is the link mentioned to the cave drawings The very first, stone age!, movies just discovered which I believe KSR said inspired his story.

This may be on topic, a rather startling development in the knowledge base of our ancestors: Researchers Sequence Genome of Individual With Neanderthal Mother, Denisovan Father

Wow, this is quite surprising. The genetic data clearly show divergent lineages and a distinct separation of these two groups several hundred thousand years before. And yet the fifth person with substantial Denisovan ancestry turns out to be a hybrid. Very unexpected. Neanderthals turn out to have been more mobile than one might have thought, as this site is at the extreme eastern part of their range, and they appear to have been more numerous in Europe. Of course the fossil record is sketchy and sparse.

Coincidentally, I just finished making a 3-part series of short videos on recent human origins. The focus is on retracing the last 40 years in the field, and how this has led to the momentum to revise our understanding of what was really going on in Africa over the last several hundred thousand years. The first is here:
https://youtu.be/Iy542ANMeMY
and the second, on the mixing with Denisovans and Neanderthals is coming out on Friday. The last covers the situation in Africa.

Another good piece in the current discovery:
https://www.nytimes.com/2018/08/22/science/neanderthals-denisovans-hybrid.html

I also see that I was remiss in not following up on Kim Stanley Robinson’s Shaman.

I liked it. Evocative portrayal of a group of Pleistocene hunter-gatherers. I really like KSR’s language and ideas.

Following up on >17 DugsBooks: & >19 stellarexplorer: I ran across this recent news in Cell Magazine : Multiple Deeply Divergent Denisovan Ancestries in Papuans. It speculates from new data that the Denisovan's had a wider range and influence than thought before.

Archaic Introgression Patterns Point to Three Denisovan Lineages Is another summation of the research above. I am old fashion I guess but I wish we could find more Denisovan burial sites.

>20 DugsBooks: More Denisovan burial sites? I’d be thrilled with one skeleton. Right now we have a finger phalanx, a toe bone, and a few teeth. And the complete genome, of course.

This finding is, I think, what you’d expect. Over the vast geographic range of Denisovan presence, you would expect variants. How could you maintain one unitary breeding population over such distances?

There has been some speculation in recent days regarding the identity of the hominin fossils found recently on Luzon:
https://www.nature.com/articles/s41586-019-1067-9

The age and location has made some wonder whether these people may have been Denisovans, or related to them. Interesting times in paleoanthropology!