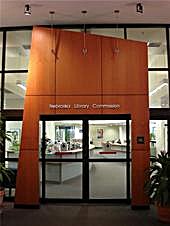 Nebraska has a long tradition of library service, beginning with military post libraries, continuing with literary society libraries founded during Territorial times, women's club libraries, Carnegie libraries, college and school libraries, and the modern libraries of today. The Nebraska Library Commission Archives, located at the Nebraska Library Commission, houses materials about the history and operations of the Commission and the libraries it has served since the agency's creation in 1901. The collection includes Commission biennial and annual reports, newsletters, documents, photographs and artifacts. Some of these materials have been digitized. Others are available for research use onsite.

À propos de ma bibliothèqueThis is not a complete representation of the NLC's collection. It only goes as far back as January 2007, only contains items with ISBNs, and then there's still other items that didn't/won't import into LibraryThing for any number of reasons. (For example, our government documents collection is not included here.) If you are interested in accessing print material from our collection please use the full online catalog @ http://www.nlc.state.ne.us/m3/.